The DSM 5 indicates that criteria include challenges in social communication and social interaction across multiple contexts over time.  These include two separate overarching criteria, with three additional categories by which to diagnose this disorder. There is even a table by which 3 levels of support are clarified.  These levels range from “requiring support” to “requiring very substantial support” (p. 52).

The first of five criteria indicate how “[p]ersistent deficits in social-emotional reciprocity, ranging, for example, from abnormal social approach and failure of normal back-and-forth conversation; to reduced sharing of interests, emotions, or affect; to failure to initiate or respond to social interactions” will be present.  It goes on to indicate how “[d]eficits in nonverbal communicative behaviors used for social interaction, ranging for example, from poorly integrated verbal and nonverbal communication; to abnormal gestures; to a total lack of facial expressions and nonverbal communication.  Deficits in developing, maintaining, and understanding relationships, ranging, for example, from difficulties adjusting behavior to suit various social contexts; to difficulties in sharing imaginative play or in making friends; to the absence of interest in peers” (p. 50). 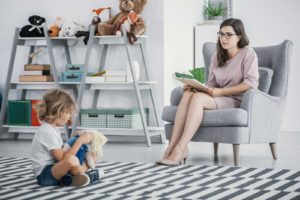 Section B includes the “[r]estricted, repetitive patterns of behavior, interests, or activities, as manifested by at least two of the following, currently or by history (examples are illustrative, not exhaustive; see text): Stereotyped or repetitive motor movements, use of objects , or speech (simple motor stereotypes, lining up toys or flipping objects, echolalia, idiosyncratic phrases).  Insistence on sameness, inflexible adherence to routines, or ritualized patterns of verbal or nonverbal behavior (extreme distress at small changes, difficulties with transitions, rigid thinking patterns, greeting rituals, need to take the same route or eat the same food every day).  Highly restricted, fixated interests that are abnormal in intensity or focus (strong attachment to or preoccupation with unusual objects, excessively circumscribed or perseverative interests).  Hyper- or hypo-reactivity to sensory input or unusual interest in sensory aspects of the environment (apparent indifference to pain/temperature, adverse response to specific sounds or textures, excessive smelling or touching of objects, visual fascination with lights or movement).

Despite the fact that some symptoms may not be fully apparent until “social demands exceed limited capacities, or may be masked by learned strategies in later life[,]” Section C identifies how symptoms must be present in the earlier stages of development.  And, according to Section D, symptoms must cause clinically significant impairments in social, occupational, or other areas of functionality.  Section E focuses on differential diagnoses.  Namely, that any of the above have not been better explained by a disability or delay other than ASD.  Specifies are vast, including but not limited to how ASD may or may not be accompanied by an intellectual disability, language impairment; medical, genetic or environmental factor(s); another neurodevelopmental, mental or behavioral disorder; as well as the potential for co-occurring catatonia (Desk Reference, p. 28-29).

Much like all of us have traits of personality disorders – we all have imperfect personalities and flawed defense mechanisms; humans are imperfect – my personal opinion is we all have traits of autism spectrum disorders.  While traits may be less numerous or intense, thereby not meeting the threshold for diagnosis, we can all relate to becoming upset when an expectation goes unmet or divergence from plan takes place (including while on vacations).  We may have a favorite food we eat consistently if not daily.  We may also have a hard time socially, wondering post-discussion if we said something wrong or missed a cue or context of a conversation (especially with regard to work and employers).  And, surely we’ve all had a meltdown in our lives.  The meltdown we experience may be due to overstimulation while in a crowd at a concert or theme park, or similar big event or excursion, where we just need to escape to a quiet corner and take a breath.

We may not experience any of these traits often or with severe intensity, but for a moment:  imagine you do.  Tough, right?  Even our more benign occurrences can distance others, create conscious patterns of social upset, including pervasive personal anxieties. The path we desire may not even seem like the path we’re permitted to stay onward.  With therapy, including behavioral coaching, social scripts may not seem so confusing, and the first thought or feeling we have may no longer be the one we privilege.  And, if we do not privilege that initial thought or feeling, perhaps cultivation of the endeavors we most desire can be achieved after all.